If you are going to apply for study aboard in future and going to prepare for your IELTS test. In this article, we are going to learn about IELTS format.

How to Prepare for IELTS Test in Lahore

IELTS is international English Language Testing system this evaluates your English on the basis of accessible and productive skills. While, the receptive skills been listening and reading the productive skills, being writing and speaking.  There are two categories of IELTS offers general and academic.

Now listening which is your first test is going to be for 40 minutes analysis for 60 minutes. While, the writing will be for 60 minutes again and speaking for 11 to 14 minutes listening reading and writing are going to take place on one day at a stretch that means for two hours and 40 minutes you won’t have any break in between the tests whereas speaking is going to take place either on the same day or in the span of 7 days.

However, Before or after listening reading and writing tests this depends on the schedule that you get from IDP or British Council depending upon whoever you register with, like which institute you registered.

Booklet it’s a simultaneous process of Less and writing you need to answer these 40 Questions whilst you listen to the audio at the end of the test. You’ll get 10 minutes to transfer the answers from the question booklet to an answer sheet which will be provided to you.

Furthermore, this is to say that the passage can be a little linear or the language could be just a little difficult on the other hand academic. You’ll have one long passage each section based upon which you need to answer 40 questions. Also, make sure that you write the answers straight into the answer sheet because you don’t get here any extra time to transfer the answers from the question booklet to any other answer sheet.

Now let’s look at writing even this section is a little different for general and academic IELT test both writing will have two tasks task 1 and task 2 in general.  You’ll have a letter in task 1 and an essay in task 2 in academic tests you’ll have to summarize a text and in task 2 you have an this letter could be formal informal or semi-formal but these summary here in academic will be on the basis of the image that could be in the form of charts graphs or diagrams in both the tests.

Now let’s have a look at speaking, is basically a one-to-one interaction between the examiner and the candidate which is recorded. Speaking has three sections in all section one has a brief introduction which will be followed by a short question and answer Conversation part 2 will be an individual speaking.

In this the examiner will give you a topic just begun on which you will have to speak for one to two minutes but the way you’ll have a minute to prepare the examiner will not interrupt at all whilst you speak. But three is a discussion here the examiner will ask you about five to six questions based upon the topic that was given to you in part two. Please make sure that you relax and speak as much you can that’s it.

Now, if you are wondering how to get register for . Here are one of the finest IELST institutes in Lahore, where you can register yourself.

Best Institute for IELTS in Lahore with experience Trainers

The two major bodies responsible for formulating and designing the IELTS 2020 test pattern are Educational Testing Service (ETS) and British Council. British Council, IDP: IELTS Australia and Cambridge English Language Assessment conduct the IELTS 2020 test to measure a candidate’s proficiency level in the English language. The Test Pattern of IELTS 2020 is designed to reflect the daily life use of English in a different walk of life; at the study, at work, at play, and at a social gathering.

Having said that, there are two versions of the IELTS test, namely IELTS Academic and IELTS General Training and the results are graded on the unique IELTS 9-band scale for both the formats.

In accordance with the IELTS test pattern 2020, both IELTS Academic and IELTS General Training are composed of four sections namely, Listening, Reading, Writing and Speaking.

While each candidate is required to take the same Listening and Speaking modules in both the versions of the IELTS exam pattern 2020, it is the Reading and Writing modules that alter for the two versions – IELTS Academic and IELTS General Training. The total duration for the IELTS test is 2 hours 45 minutes.

According to the test pattern of IELTS in Lahore

The speaking test is conducted as a one-on-one test to assess a candidate’s English communication skills. The candidates are put through a real-life conversation with a real person (not necessarily a native speaker) to get their English conversation skills tested. The responses are recorded by the examiner and later evaluated by the certified IELTS examiners.

How is IELTS Test in Lahore ?

On the test day of IELTS 2020 exam, candidates appear for the Listening, Reading and Writing tests one after the other in the same sequence, without any breaks in between the module sets.

These components are always taken in the above-mentioned order as given in the IELTS 2020 Test pattern, barring the Speaking module.

According to the IELTS Test pattern 2020, the Speaking module can be scheduled either after break on the same day as the other three tests or within seven days before or after the registered date of the test.

However, it is decided by the officials and much depends on the specific IELTS test centre from where the candidate is appearing from.

As per the test pattern of IELTS 2020, the speaking test is conducted as a one-on-one test to assess a candidate’s holistic proficiency English communication skills. This means candidates are put through a real-life conversation with a real person to get their English conversation skills tested. However, the responses of the test taker are recorded for detailed evaluation. The test results of IELTS depend on the overall performance of the candidate in IELTS 2020.

International English Language Testing System, acronym as IELTS is an English language proficiency test. the IELTS 2020 Test pattern is structured in a way that it reflects all the related skill sets including Listening, Reading, Writing, and Speaking of the candidate aspiring to either study or work abroad.

According to the current statistics, IELTS test scores are accepted by over 10,000 organizations worldwide, including schools, universities, Government departments, employers, immigration authorities and professional bodies.

Is there any Eligibility Criteria for appearing in IELTS ?

There are no specific IELTS 2020 eligibility criteria set by any of the exam conducting bodies. However, the selection procedure varies among universities/organizations. Hence, the candidate should be aware of the application procedure of the institute/s where he/she applies to. An aspirant has the freedom to choose IELTS test date 2020 in accordance with his/her convenience and availability of seats. The IELTS test is available throughout the year and in 2020, IELTS would be conducted 48 times.If you are interested to get 7+ band like our students then contact. best IELTS  Academy in Lahore.We also offer free class.Our Academy is registered with British Council and Aeo. 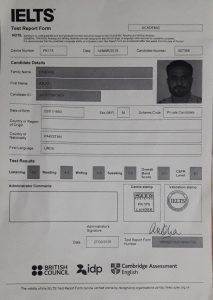 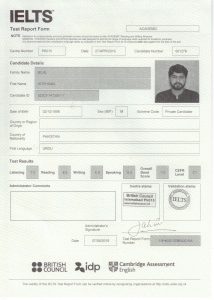